BirchBioMed Inc. is exclusively licenced by the University of British Columbia to develop anti-scarring drugs and autoimmune therapies based on our leading drug candidate, FS2

The double-blind and placebo-controlled clinical study involving 40 healthy volunteers demonstrates the safety of topically applying FS2 cream at the maximum feasible dose with no adverse effects. The study’s findings will be released next week at the 2016 Congress of the International Society for Burn Injuries, the quadrennial gathering of the world’s foremost wound-care and burn injury experts.

BirchBioMed holds the exclusive, worldwide pharmaceutical license from UBC for FS2 and AI-001, two medical therapeutic technologies that we believe signal significant breakthroughs in the treatment of scarring and certain autoimmune diseases, including Type 1 Diabetes and Alopecia (disfiguring hair loss). BirchBioMed is developing these revolutionary therapeutics to replace existing treatments for these diseases.

Discovered by UBC Professor of Surgery Dr. Aziz Ghahary, and his team, including Dr. Ryan Hartwell one of the co-founders of the FS2 technology and Chief Science Officer of BirchBioMed, these technologies are being viewed as important breakthroughs that have the potential to impact millions of people worldwide.

“Until now there has not been a single therapeutic that can satisfactorily target the molecular aspects of scarring, which results from the body over-repairing after an injury, surgery or disease,” said Dr. Ghahary world-renowned as one of the top experts in scarring and burn injuries, is also the director of the British Columbia Firefighters Burn and Wound Healing Laboratory, part of the Vancouver Coastal Health Research Institute (“VCHRI”).

In addition to showing effectiveness in preventing scarring and promoting the breakdown of existing scars, FS2, in combination with our licensed AI-001 therapy, a simple, short-term protocol, has also reversed certain autoimmune diseases, including Type 1 Diabetes and Alopecia, as demonstrated in gold-standard models and reported in top-tier, peer-reviewed medical and scientific journals including Diabetes and the Journal of Cell Physiology

“It is our intention to develop our therapeutics to deliver products that can serve the entire global market and address a number of healthcare’s costliest segments,” said Mark Miller, BirchBioMed’s Chairman and Chief Executive Officer. “Completion of Health Canada’s approved Phase I trial of FS2 is a first of its kind and a major step in bringing its potential benefits to people suffering worldwide.”

Dr. Hartwell, BirchBioMed’s CSO, said: “The opportunity to radically reduce costs for the burn patient population and scarring in general, as well as FS2’s impact on certain autoimmune diseases, holds the promise of changing the face of treating these conditions in revolutionary and highly cost-effective ways.”

“Scarring affects hundreds of millions of people,” said Dr. Hartwell, “and the physical and emotional toll it takes is devastating.  The simplicity of our topical treatment holds the promise of improving patient quality-of-life and potentially achieving dramatic reductions in the cost of treatment.”

BirchBioMed’s UBC-licensed therapeutics have benefitted from approximately $6 million in academic research grants and donations from the Canadian government, Insurance Boards and leading foundations, including the Canadian Institutes of Health Research Proof-of-Principal Program, the National Science and Research Council, the JDRF (formerly the Juvenile Diabetes Research Foundation) and The National Alopecia Areata Foundation (“NAAF”). It is also the first technology that UBC, or any other Canadian academic institution, has advanced from the discovery stage through Phase I clinical trials with support strictly from government and private donations. We believe this achievement is an index of this technology’s potential importance and impact on society.

To date, BirchBioMed has raised and/or received verbal commitments for approximately $2 million in Series A funding part of which has allowed BirchBioMed to surpass a major milestone requirement in its licensing agreement with UBC by raising more than $1 million (USD) in seed capital within 12 months (by June 10, 2016) of the license agreement’s start date, allowing the Company to retain substantial long-term benefits and upside through its licensing of the UBC technology.

“We are very much looking forward to seeing BirchBioMed advance this new drug to the next set of clinical trials and through to market (because of its) significant potential for widespread benefit,” said Brad Wheeler, UBC’s Technology Transfer Manager, adding that FS2 is “the most clinically ready UBC therapeutic to be transferred to industry to date.”

BirchBioMed’s license was granted through UBC’s University Industry Liaison Office. BirchBioMed is the 86th life science spin-off company from the university. Both UBC and VCHRI will also benefit through milestone payments based on clinical development and sales performance, as well as royalties based on BirchBioMed’s worldwide sales of the therapies as the technologies develop commercially. 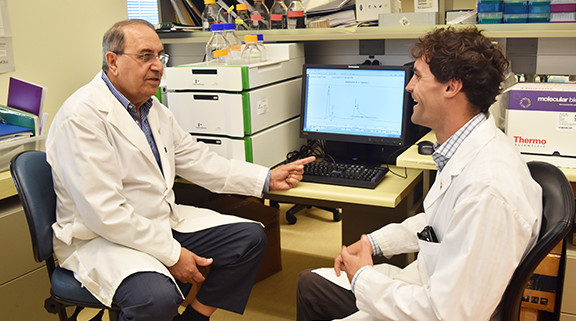 University of British Columbia (UBC) Professor of Surgery Dr. Aziz Ghahary (left) and Dr. Ryan Hartwell, Chief Science Officer of BirchBioMed, Inc., co-founders of ground-breaking anti-scarring and autoimmune therapies that UBC has exclusively licensed to BirchBioMed. These two therapeutics are being viewed by leading medical authorities as important breakthroughs that have the potential to impact millions of people worldwide.